After attending a few of the York Spring Schools and enjoying Basket Making very much I decided to progress I needed some 1 to 1 time with a Master Weaver. On my last York course Jenny Crisp had been teaching another class and I was lucky enough to share a dorm with one of her students. I was impressed with the pieces she had made and as a relative beginner she was impressed with Jenny’s skill, patience and her teaching style.

After the course I did a little more research and decided Jenny was the weaver for me!

I have been growing a relatively small amount of willow for the last 3 years. I live in a steep sided valley and land is at a premium here. The willow is growing well and some of it is large, too thick for me to easily weave with. With good growing land being so scarce it wouldn’t be easily possible for me to simply grow more and more to get the finer willow I work with.

On a course I had completed with Paul Hand making traditional Bee Skeps with straw and cane, we also experimented with brambles, the material that would have been traditionally used to bind skeps. We used a delicate French device to “skein” the brambles. It occurred to me then I could split the thicker willows I have to make them easier to weave and increase my crop at the same time.

I contacted Jenny and asked if it would be possible to teach me over a couple of days with the emphasis on learning how to maximize my crop but I also knew I’d learn some really useful basketry techniques from her, particularly how to “cleave” or split the willow and how-to skein it. Happily, she said yes.

We met in the Autumn and I wove an oval shopper that would allow me to learn the skills I wanted. I used one of Jenny’s pre-formed oval hoops but I also made some of my own. I didn’t use these as they need time to dry and set in shape. It was interesting to note of the whole 2 days the number of very small moves, or nuances that made a basket really good or just ok. On the hoop for instance that was carefully wrapped around a wood and iron former, if there was a growing node where the willow was to be shaped around the former, the willow would probably kink. Taking the time to carefully take off these nodes with a knife meant it didn’t kink and a better shape was produced. The ends were tapped and nailed in place and left to dry. This used thick willow.

5ft willows were then used to create a semi Catalonian base. I call it a Jenny base. 2 sets of 3 thicker rods were placed length ways down the basket and placed evenly away from the centre and sides, other thinner rods were then woven between these. A thin 5ft rod would weave 3 rows back and forth and then left, the next rod would be a thicker, longer, steamed rod was then woven just 1 width and left to hang out alternately to the left and right of the basket. This pattern was repeated around the basket creating 36 rods sticking out at precise intervals around the basket. All these rods came out on the underside of the basket. Once all in these were raised to become the side stakes of the basket. I used a 3 rod whale up the whole side of the basket using 3 different willow varieties and through the whole basket paid so much attention to how it was looking, symmetry, neatness.

The border was I think Jenny’s signature weave, a behind 2, in front of 5 and behind 1 and out again. A lot of time was spent laying the border well and Jenny taught me some tricks of the trade that made the process much easier than I had ever done and produced fantastic results.

The handle was 2 thicker pieces of willow that had been previously shaped and left to dry, again I experimented with this, but used Jenny’s pre-formed handles. They were pinned together and when pushed through the basket were pinned again. This is something I had never done before.

The evening before I had been playing with Jenny’s skeining machine, a very delicate looking box with blade and simple screwable mechanism to produce very fine skeins of willow to create a skeined handle. I loved this process, slow work but very enjoyable and it created a very thin, very pliable skein to work with. During the evening I also experimented with cleaving thick willow. It was a straightforward process, but will take practice to produce good, even lengths and we’d decided that I wasn’t going to use cleaved pieces in my overall basket as it would take too much of the short time I had with Jenny. I was happy with the learning though and the cleaving I can practice at home.

Back to the skeined pieces I had produced these were put in warm water to make suppler again and then 1 of the pieces was pushed down into the basket at the base of the handle. The handle was then tightly wrapped with the skein and after a number of rows another skein was placed in the middle of the handle pointing upwards. The skein wrapping the handle then formed a pattern with the up pointing one, of 3 wraps and then 1 pointing up over the top of the next wrap and then 3 more wraps and so on. A simple skeined pattern, but really quick for me to understand and very effective on the basket.

I often have trouble making my baskets flat and again Jenny showed me simple tricks to get a better result. It was such an informative 2 days, it came just at the right time in my learning journey and Jenny’s patient approach and her approach of letting me adapt her way of weaving for my tiny hands was really helpful! I’m already using my new skills and looking forward to progressing my basket weaving skills.

I’d highly recommend anyone to undertake more intensive training like this and I can’t recommend Jenny Crisp as a teacher enough! 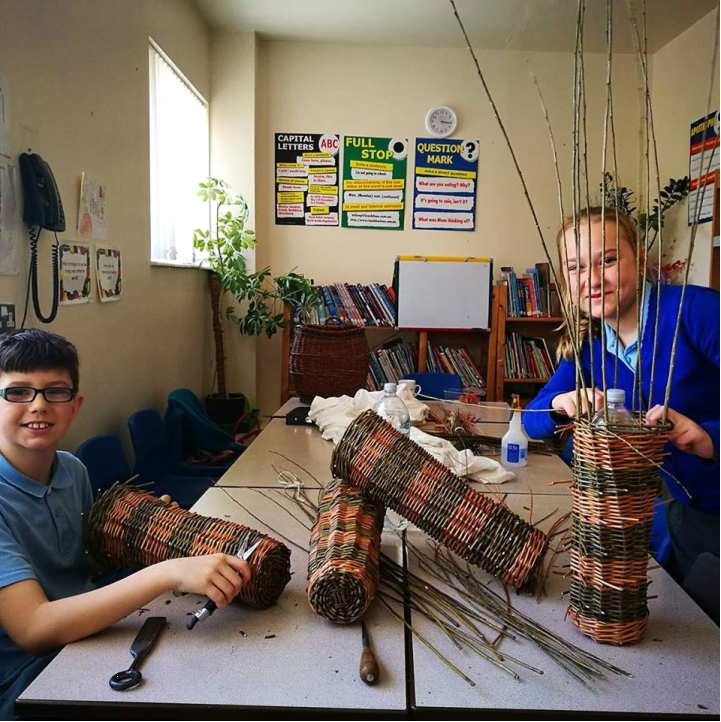 All of a Quiver